Are you planning to submit a new app or app update after February 1st? Heads up developers, Apple will be requiring all apps to be built with the latest version of Xcode and the latest iOS 7 SDK.

The good news? According to Apple’s App Store support page, as of this writing, over 79% of devices are running iOS 7. That’s a pretty significant portion of the active devices in the wild. Anecdotally, for the apps that I see analytics on, that numbers line up pretty close to that as well. If you haven’t updated to the latest SDK for your app and incorporated some of the new features, it’s probably time to. 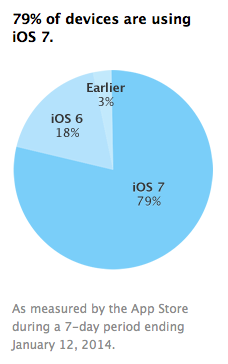 There are tons of new features to be implemented in iOS 7. If you haven’t revamped your app yet, think about more than the look and feel. Perhaps you can incorporate features like background fetch or UIKit Dynamics that can help differentiate your app from the rest.

Take a look at Apple’s iOS 7 Developer’s Guide for more info about diving in to iOS 7.