In an effort to dive in and learn about CoreAudio on iOS, I recently implemented an iOS app call CoreAudioMixer. The app simply provides a way to mix a few audio tracks together via the CoreAudio APIs. The focus of the implementation was CoreAudio, not the user interface, so I kept the interface implementation to a minimum: a play button and a couple sliders :) 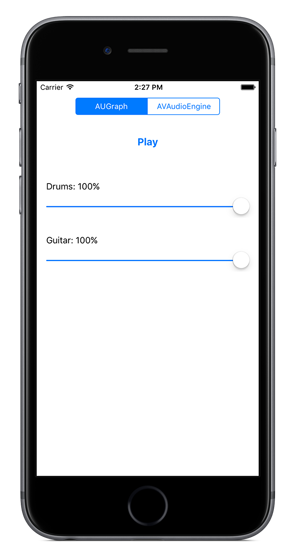 The app uses two different audio files, one with drums and one with guitar, and allows the user to mix them together.

There are two different implementations of interfacing with CoreAudio. First with AudioToolbox using AUGraph and second with AVAudioEngine, Apple’s newer audio API released with iOS 8. The segmented control at the top allows the user to select which implementation to interact with.

Once an implementation is selected, the audio files are loaded into the buffer and prepared for playing. Press “Play” and then adjust the volume on the individual tracks via the sliders. Playback can be stopped and started via the “Play/Stop” button. The output volume level is shown as a percentage between 0% and 100%. The guitar is output to the left channel and the drums are output to the right channel.